The Space Debris issue is often compared to the Great Garbage Patch in the Pacific Ocean, a swirling vortex of debris floating in the ocean that increases daily.

The garbage patch is human-made and formed from non-biodegradable debris for over fifty years. Increased global concern has led a shift from knee-jerk tactics to thinking ahead, looking down the supply chain to source, to prevent debris from being swept into the ocean. Locating and tracking the ocean borne debris is also difficult. Due to low density, and the presence of millions of microscopic plastic particles, the patch is invisible in satellite image­­ry. Similarly accurately tracking small debris (below 10cms) remains elusive. Both the oceans (High Seas) and Outer Space are global commons, owned by no nation, and often framed by ‘the Tragedy of the Commons’. [A westernised economic principle that open ‘free-for-all’ access to scarce resources leads inevitably to exploitation and denigration.]

But there are key differences between the two. Space debris management benefits from an established space surveillance and tracking (SST) system, originally developed by military bodies in particular the USA. Although the SST system was never designed to effectively monitor the increasing commercial space traffic – in Low Earth Orbit – and the ensuing decommissioned debris.

Another notable difference is an absence of unpaid environmental volunteers climbing aboard space-bound vessels, no Greta Thunberg, nor canny self-funded innovators testing out novel ways of clearing debris. Entry to Outer Space is by invitation only through designated launch sites, regulations, assigned owner responsibility, with sufficient clout and resources to pay their way and the willpower to negotiate bureaucratic procedures, laid out in international treaties (that paints less of a wild west image than presented by the media). Instead, space debris, innovation and problem-solving is increasingly led by a global ‘free market’ philosophy – along a sliding scale from the dominant trade-led light-touch regulatory approach in the US to the waning European Union’s trade tariffs. In short, and over simplified, identify markets, attract investors and space debris will be cleared.  A view highlighted by the redirection of SST responsibility from the US military to the Department of Commerce and the recent publication of the Atlantic report in April 2021, that states: “The international law of space, centered on the 1967 Outer Space Treaty, is outdated and insufficient for a future of space in which economic activity is primary”.

So as government funding dissolves in the shift towards ‘New [commercially-funded] Space’, in which direction to search for viable markets to fund future SST developments? Upstream or downstream of the satellite supply chain? Looking downstream to the end of life market are active debris removal systems (salvaging or de-orbiting), a necessary part of the space debris solution. But this End of Life market is currently considered challenging. Not only for lack of technical know-how but for legal and regulatory barriers, in particular the current stance of “whoever touches the debris is immediately liable” (Although without sufficient funding, any bespoke instrumentation remains in R&D and low technology readiness).  The Tragedy of the Commons’ scenario also rears its head with the pessimistic proclamation: ‘nobody holds legal responsibility or ownership, so nobody will care’.

Looking upstream to extending the lifecycle of large satellites are the fields of In-Orbit Servicing and manufacturing that offers a more promising market. 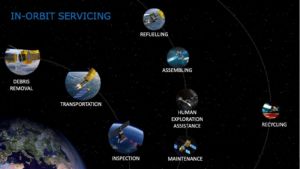 Through repairing, renewing and rebuilding in Low Earth Orbit, IoS aims to extend the lifecycle of satellites and reduce future space debris (although the small single-use cubsats being hurled into space pose another problem). But to operate and develop, IoS needs the data, knowledge and technical expertise held by the SST community at every stage of a mission – from prelaunch planning, launch, collision avoidance, approach and contact to undocking, retreat and verification. In turn, IoS offers the SST community a projected market value of $4.5billion by 2028, to fund future developments. And so, it appears, the future of SST and IoS are symbiotically linked.  But to advance in a free-market context, both fields need to attract, in particular finance, the ‘best’ innovators in industry, that are usually Small and Medium Enterprises (SMEs).

Currently, challenge prizes are in vogue that set a ‘problem’ for innovators to solve. Benefits are marketed as ‘in the taking part’, rather than ‘in the winning’. But SMEs work on tight profit margins, limited resources and cannot invest time and energy in unpaid ventures that may lead no-where. As such, many SMEs will only invest effort in a ‘challenge’ that is unambiguous, clearly worded, complex rather than complicated, has fair judging criteria and doesn’t rely on insider knowledge and/or years of experience in the field. Importantly, unnecessary risks are limited by rigorous prior background research and includes designing/testing out potential (prototypes) with innovators and end users from the start. This background research should be based in a real-world context that considers all mitigating factors – Political, Economic, Social, Ethical, Technological, Legal and Environmental  -that impact on the opportunities, challenges or insurmountable barriers to future developments.

And, for me, there is one glaring potential barrier (the sting in the tail) to introducing trade-led innovation to space debris solutions.  Free market competition is usually driven by stakeholder-led companies, and creates a shift in ethos around data sharing that (potentially) sets up an oxymoron.  Investment by companies in the field create resources to do the work, and encourages new ideas and players to the field. But it also transforms data, knowledge and expertise into valuable monetary commodities to be traded and negotiated (leading to Intellectual Property Rights ) and an aversion to share commercial competitive advantage.  And so we return to similarities between Space Debris and the Great Pacific garbage patch: the ongoing conflict between market forces and the Common Good (that in the worlds of IoS and SST is the global sharing of real-time data and the ability to interpret and apply this knowledge cooperatively at short notice).

Postscript: This a pertinent issue in the UK with the withdrawal from the EU and the recent introduction of the bilateral EU-UK Trade and Cooperation Agreement (TCA). The document fully supports the new space industry and negotiated ongoing access to the European SST systems – but it also frames sustainability as a trade-led endeavour that, for some legal commentators, takes us back fifty years to the 1970s.

Fionagh Thomson / About Author
Fionagh is a visual ethnographer (environment, space science, medicine & disruptive technologies), human geographer and applied philosopher. Currently, she is a visiting researcher in the Centre for Advanced Instrumentation and Centre for Extragalactic Astronomy at Durham University.
More posts by Fionagh Thomson

This site uses Akismet to reduce spam. Learn how your comment data is processed.